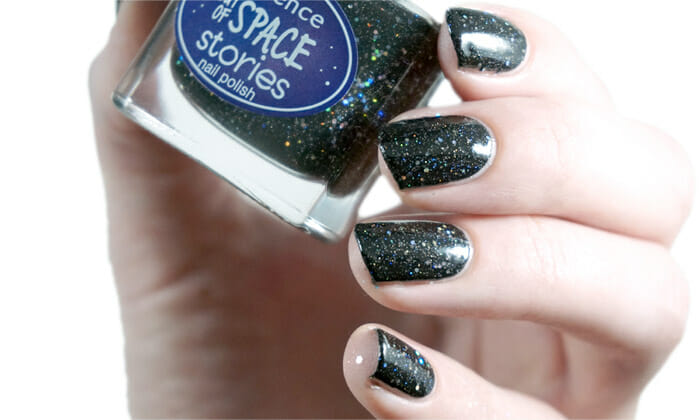 1000 light years away is a black polish filled with small holographic glitter and larger holographic hex glitter. The formula is a little bit on the thick side and was a little bit hard to apply. I guess that’s due to the large amount of glitter it contains. It is opaque in two coats, that’s the upside of it being thick. It dries down to a matte, gritty finish. I didn’t really like it so I’m wearing two layers of top coat in the pictures. I’m not sure if it supposed to be a textured polish, or if it’s just because of the glitter. Personally, I don’t really like the result, it is a little bit thick and lumpy.

1000 light years away immediately reminded me of a polish that I already owned, Picture Polish Holo Sphere! In the picture below I am comparing these two polishes. The text on the bottles is already similar.. On Holo sphere it says: “Out of this world out of this holosphere” on 1000 light years away it says: “Out of space stories”. OK, maybe that’s just a coincidence? On the right I’m wearing on my index and ring finger 1000 light years away and on my other nails I’m wearing Holo Sphere. They are really really close, especially in real life. The glitter in Holo sphere is a little bit bigger and it contains duochrome shimmer. But that’s the only difference! 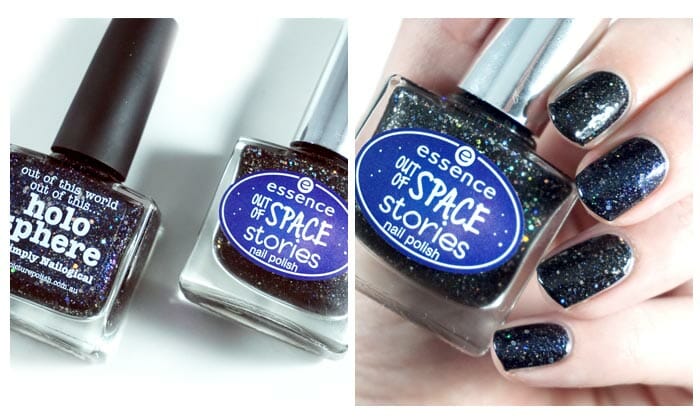 The formula of Holo Sphere and 1000 light years away is also similar, both polishes are a little bit thick and hard to apply. I think it is very likely that Essence was “inspired” by Picture Polish, when creating this polish. Would I still have bought Holo Sphere if I already owned the Essence? Yes, because I really like Picture Polish and I really like Simply Nailogical. But in terms of looks, you don’t really need both! It’s good news for fans of Holo Sphere though, because Picture Polish just announced that they are going to discontinue Holo Sphere. Of course, 1000 light years away is also much cheaper than Holo sphere (1.99 euro against 13 euro). I do have to give Essence credit for keeping up with trends!

Do you think Essence was inspired by Picture Polish?