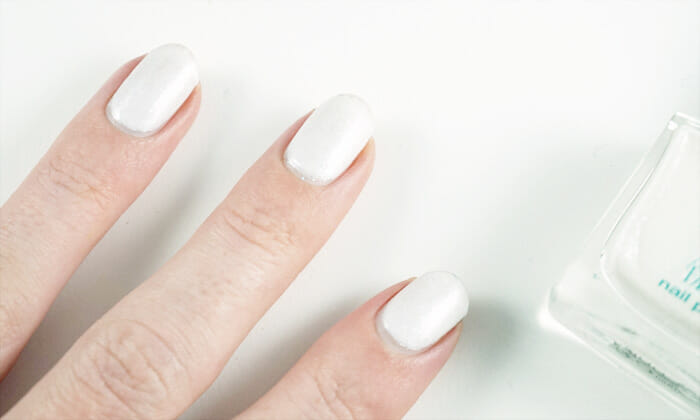 It has been a while since I bought a polish from an Essence Limited edition collection. When I saw pictures of Let’s Take an Elfie, I knew I needed to have it. It looked exactly like how Essie – Private Weekend should have looked. I hope I’m still in time with my review, because I’ve heard there is already a new Essence Limited edition called Winter Wonderful. Anyway, maybe you can still find Let’s Take an Elfie somewhere in a discount bin!

Let’s Take an Elfie is a white sheer polish with iridescent sparkles. Essence calls this a “snowflake effect” and I understand what they mean. The sparkles aren’t holographic but when the light hits just right, they do have a little color shift. The polish was very sheer, but I knew that when I bought it, so I was prepared. It took me 4 coats to make it completely opaque. Normally I never do 4 coats, because I find that three is my limit. However, for this polish I was willing to make an exception. 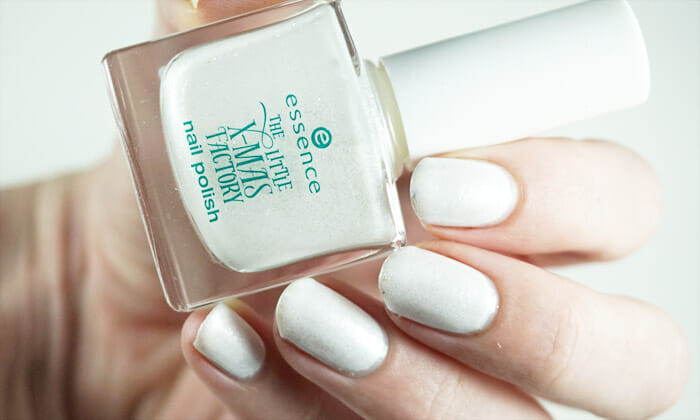 Probably because of the shimmer, the polish is a bit thick and it dries gritty. So you can imagine, that after 4 coats, I really had a thick layer of polish on my nails. I think you can also see this in the pictures, it looks really thick. The shimmer is really pretty though, which makes up for it a little bit.

After all, this polish didn’t really blew me away. The idea is very nice, but it is just too hard to apply and looks bumpy once it’s on the nail. I think I’m going to give this polish a second change, because I think it will look amazing over another white polish. I don’t know if I would recommend Let’s Take an Elfie to anyone. Probably only if you really love the sparkles and you are willing to struggle with this polish.