Happy birthday, Holo taco! Each year, Holo taco releases a special collection for its anniversary. Although I have been a long-time fan of Cristine (Simplynailogical, the owner of Holo taco), this is actually the first time I purchased the anniversary collection. This year, it’s all about a monochrome theme, and I love it!

I needed two to three coats for complete opacity. The shade was very easy to work with.

Reflective Taco is the second shade I tried from this collection. Sadly, it’s already sold out due to popular demand. Reflective taco is a light-reflecting top coat. I had no clue what to expect since I hadn’t tried any reflective polishes yet. Let me tell you, it is pretty, but nothing like you see in most pictures. I’ve tried to capture the shade accurately above. It sparkles really really pretty, it’s like having little diamonds on your nails!

This is one coat of Reflective taco over Morgan Taylor’s Laying low, because I wanted to create a starry night vibe. It basically looks great over any other shade, even over lighter shades! Reflective taco dried a bit gritty (like a liquid sand polish), so it definitely needed a quick drying topcoat to smooth it out. If you don’t want to wait until Christmas: Cirque Colors has a shade called Discoball, which is also a reflective topcoat. Discoball is however much denser than Reflective taco.

Holo taco Blacklisted is a black metallic foil finish and holographic glitter. Holo Taco has done these types of shades more often, but it also reminds me of the Ultrametallics finish of ILNP. Blacklisted was a bit thick, and I did not find it super easy to apply, but it’s manageable. I reached full opacity after two coats.

The only downside of this shade is that when you try to remove it, the silver flakes in this polish just get everywhere!

I already owned ILNP Private reserve, which is an almost black Ultrametallic. Of course, I had to compare it to Holo taco’s blacklisted. Blacklisted is definitely more black and more opaque than Private reserve, but both shades are closer than I expected. I think I actually prefer Private reserve, since the formula was a bit easier to apply and it contained a bit more holo. It’s all a matter of taste though!

Holo Taco Smokeshow is a dark grey holographic glitter polish, comparable to for example Holo Taco’s Midnight Spark. What makes Smokeshow a bit more special is that next to the regular hexagonal glitter, it also contains some larger square glitters.

The polish was very thick since it is absolutely packed with glitter. I did two coats, and you can still see some bald spots if you look closely (but it’s very difficult to see due to all the glitter). I wouldn’t recommend doing three coats of this one, because I think it would just get too thick. The polish dried very glitter and I needed three layers of topcoat to completely smooth it out. Also, removal is very difficult, so I would definitely recommend using a peel-off base coat with this one!

Last but not least, Holo Taco Featured Guest. This is probably my favorite color of the collection. It was marketed as a ‘white’ linear holo, but on me it is actually more like a light grey. Nevertheless, I absolutely love this shade! It’s a very soft shade, but when the light hits just right, you see all the holo!

This shade was easy to apply, but it did take me three coats to reach full opacity.

I really liked this collection. I wasn’t blown away by the formulas of Blacklisted and Smokeshow, but it seems to just be a consequence of putting so much glitter in a polish. For the time of year, I found the collection to be a bit dark. But I’m sure I will reach for it more often when the weather gets colder.

Holo taco is always so creative, and I can’t wait to see what they will be releasing next! 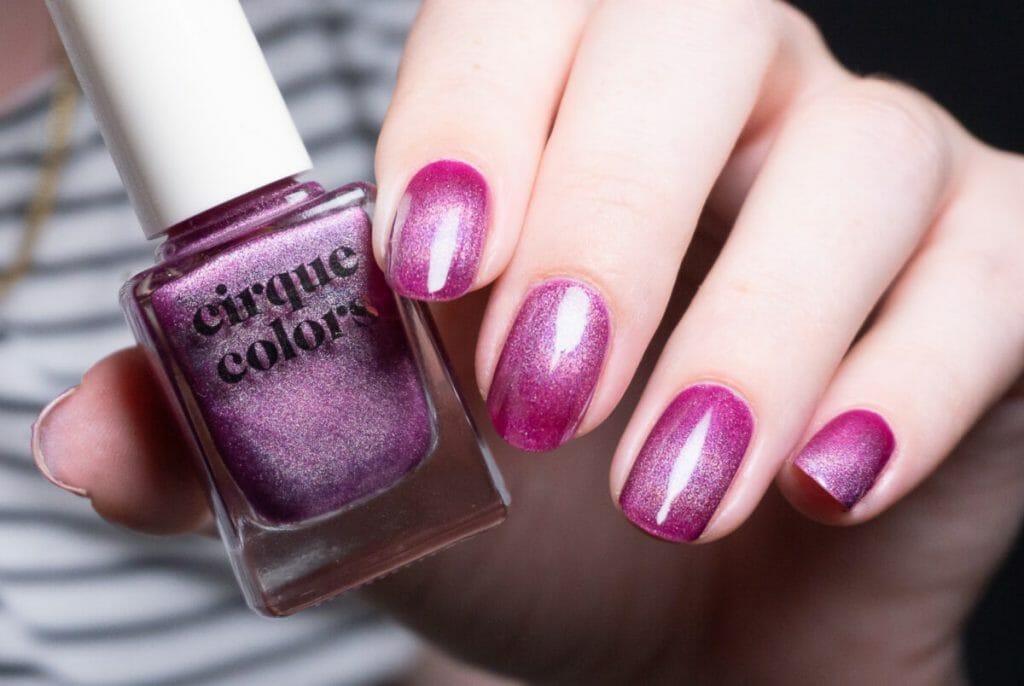